We have three Squib keel boats.  Satyr (red), Brandy Snap (yellow), and Lift Off (blue) and a Soling – Time Flies featured on a separate page.

For the techies amongst you, we have reproduced an article for you courtesy of the National Squib Association.  For the non-techies (like me), Squibs are a scaled down Ajax 33 giving us the enjoyment of a dinghy and the stability of an offshore yacht.

This extract from the class web tells the story  the boats we sail: 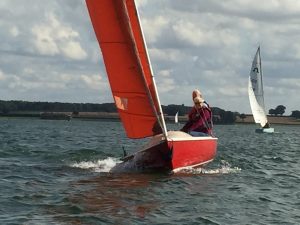 Sailing in good company – Satyr taken from Brandy Snap with Time Flies having just passed by and sailing away.

“The National Squib is a one design racing keelboat, originally designed by Oliver Lee in 1967. The class association has over 600 members. There are around 30 fleets in the UK and Ireland, racing at club, regional and national levels, on coastal, estuary and inland waters.

The Squib is just under 6.0m in length, with a 1.87m beam and a fin keel of 1m draft. Its two person racing crew use Jib, Main and traditional Spinnaker with a total sail area of 29m2. Its all-up weight is 680kg, so a Squib can be trailed by a medium-sized car.

The Squib has been described as “a lovely little yacht” but when being sailed competitively can readily be appreciated for performance characteristics more akin to a racing dinghy.

One of the main strengths of the one design Squib is that a properly prepared boat – either a new one or a boat originally up to forty years old, can be sailed competitively in the national fleet for 10 or even twenty years, thus making the best of any initial investment. It is not necessary to change boats regularly to be competitive.

There are three approved sail makers: Batt Sails of Chichester; Hyde Sails of Southampton and Lonton and Gray of Burnham.

Class officials and fleet captains can provide guidance on the purchase of second hand boats.

The Class is delighted to welcome new Squib sailors. 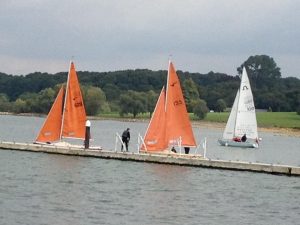 The Squib was designed by Oliver Lee in 1967 as a scaled down version of the Ajax 23. The prototype was a cold moulded wooden hull, with an iron keel. It was extensively and successfully tested in 1967/68 and was used as a plug for the first GRP Squib launched in June 1968. The first production boat was No.11, called Squib. It has been restored by Tony Saltonstall and is now sailed regularly by Dick Batt on the South coast.

The first fleet was formed at the Royal Corinthian YC in Burnham, where the first 150 or so boats were built by Oliver Lee (up to 157 Cheque Mate). From the early 1970s the production was transferred to Hunter Boats in Rochford, Essex (Boat numbers 158 Hera to 724 Tais).

Soon Squib fleets were established elsewhere on the East Coast, at Waldringfield and Aldeburgh, and also spread to the South and South West Coasts, Brixham, and to Wales at Abersoch and Anglesey.

The success of the Squib design is demonstrated by the rapid growth in the number of boats in the early years: three hundred by 1972, and 400 by 1974. The successful adoption of the Squib class by clubs can be seen from the example of the Royal Anglesey Yacht Club. In 1972 one Squib was test sailed, by 1977 twenty-two Squibs were registered and 10 raced regularly.

By the end of the 1970s the Squib was a well-established class. Its qualities were recognised early in the decade when the RYA granted the Squib national status and following the Squib symposium at Burnham in 1974, where members of the yachting press raced in Squibs, the Design Council placed the Squib on its index of selected designs.

A major technical development in the 1980s was the introduction of the barber hauler system for foresail control. It was introduced initially by class stalwart Tony Saltonstall, and occasioned some debate. It led to significant improvements in the capabilities and handling of the Squib upwind, and is now universally used within the fleet.

There are perhaps two important and linked characteristics that have contributed to the long term success and resilience of the class. One is the longevity of the competitiveness of the boat itself, it does not need to be replaced. The second is the long term commitment to the class, of good helms and crews of national prominence and ability, who have chosen to race Squibs for many years because of the challenge that the boat and the national fleet provide. Leading helms, boat-builders, and sailmakers from fleets like the 505s, Enterprises, Fireflies and Merlin Rockets are an integral part of the Squib Fleet. 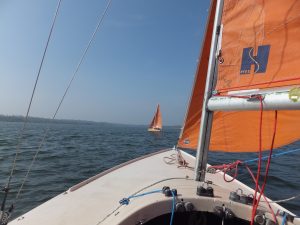 The growth and spread of the Squib class has continued in more recent times but not surprisingly at a more steady rate. Following a long period of production by Hunter Boats in the 1980s, production was taken over by Oliver Lee Racing Yachts (John Chardin and Peter Barker) who built from number 725 to 767 Leisurely Pint. One of this group of boats has won the championships twice and the inlands once in the last five years (2007-2012). After the death of Oliver Lee in 1993, boats were produced by Barker Brewer Boats from 1994-1996. 771 Arctic Fox won the national championships in consecutive years 1995/6, sailed by Stuart Brewer. In 1997 the licence was taken over by Parker Sailboats. By 2010 they had built around 100 boats. Perhaps the most well-known of these is Tony Saltonstall and Gerard Dyson’s 800 Alchemy, a regular race and series winner. The production of Squibs was continued by BP Sailboats.

In 2009/2010 the class association decided to invest several thousands of pounds in, first, a new deck mould and then a new hull mould. Since the first Squib was built, 3 slightly different keel patterns have been in use. The first was apparently destroyed in a fire, the second pattern was thicker and possibly made with the cruising version (Hunter 19) in mind, and the third has been used from around 1995 until the present day. This pattern, like the hull moulds, is owned by the class and approved by the RYA. Successful championship boats in the last 15 years have come from four different boat builders.

The total number of boats produced now approaches 900 of which two thirds are registered with the association. They are raced on the East, South, South West, and North East coasts of England, in Scotland, Wales and in Ireland (North and South), in nearly 30 fleets. Several clubs have between 20 -30 registered boats.

A feature of the last decade has been the growth and development of the fleet in Ireland. As far back as 1981 the championships were held at Belfast. Between 1990 and 2010 five championships have been held, “across the Irish Sea”, alternating between Belfast and Dublin – the 1996 championships held at Howth, north of Dublin were the first ever to attract over 100 boats.

The Irish fleet is still growing with the Irish Forum dealing with its promotion. There is a regular flow of boats being sold from the UK mainland to Irish sailors. In 2011 thirty-five boats contested the Irish nationals at Howth near Dublin. The 2011 Irish Freshwater championships held on the beautiful Loch Dearg on the Shannon, attracted entries from the UK as well. 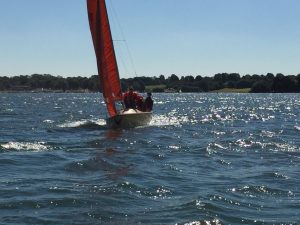 The National Squib has proved itself as a classic racing keelboat. The concept originated by Oliver Lee, half a century ago is still very successful, with a vibrant and strong class association and active fleets who include current, past and future world champions in many top sailing classes.

The National Squib provides a superb sailing experience for people with disabilities. The East Anglian Sailing Trust bases its sailing programme on the Orwell River in Suffolk and recently purchased three new boats. The Squib class provided boats to facilitate the 2009 Special Olympics at Rutland Water.

There have also been international developments in recent years. There are Squibs sailing regularly in the Caribbean and six Squibs have been sold to Germany. In 2012 an “exchange championship sail” took place between the Hunter 19 class (a Squib with a lid) and the UK national Squib class. Bryan and Jenny Riley competed at Midmar Dam, South Africa in March and the Hunter 19 chair and crew from South Africa competed in the 2012 national championships at Dartmouth.”