The weather was dry, warm and breezy for the taster day – enough to make it fun and interesting for our  CSSC taster guests

With a helm and a competent crew on each boat we launched both Squibs (Satyr and Lift Off) and Soling Time Flies early, thanks to volunteers: Eric, Grahame, John, Mike and yours truly, Dave.

It turned out to be a family taster sail with Paul Brocklehurst and his daughter Neve and Jacqueline Roberts and her daughter Beth,  all joining us for their first sail.  Paul and Neve joined John and Mike on Soling: Time Flies – who famously sailed in the 1972.  Jacqueline sailed with Grahame and Eric on Squig: Lift Off and Beth joined Dave and Mike on Squib: Satyr. 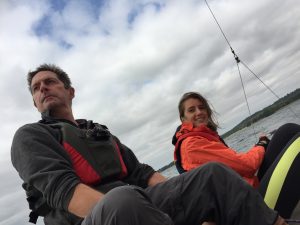 Time for taser guest Beth to have a go on the helm – she did really well, considering it was a Force 3-4 and gusty and this was her first time. With watchful support from helm Stewart Snowball

Completed in 1977, the reservoir is the largest man made reservoir in Europe covering an area of 3,100 acres and at the crest of the dam is 1,200 metres long, with a maximum depth the reservoir is 34 meter and holds 124,million litres. With the peninsula it forms a reverse letter C giving the effect of two lakes and a large expanse of water  around the damn area. The views and wildlife are stunning. 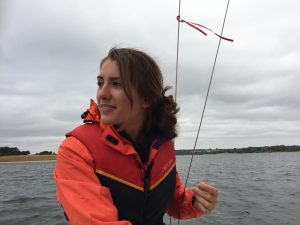 The photos are limited to those taken by Dave Grundy – with apologies for some technical glitches, but with a  strong breeze it was a little lumpy – but did provide for exciting sailing as we explored both legs of the lake and even visited “Rutland by the sea” and area sanded near the dam for people to swim safely and enjoy the ‘seaside’ and we also sailed into Whitwell creek to see the slides and folks paddle boarding, and the Rutland Belle pleasure boat coming into her jetty.

Apologies for the poor quality of the video  – but wanted to share Beth’s first time helming in challenging conditions for someone new to sailing – well done Beth!

A short break for lunch and all change.  Jacqueline and Beth went on Time Flies – with John and Stewart (who swapped places with Mike on Satyr) and Paul on Lift Off and Neve on Satyr.

“It looks like the wind has dropped”  as we returned to the boats  – “let’s see when we get on the water”.  It is remarkably different on the water and in fact, the wind picked up and got a tad lumpy as the wind rolled up the length of the south leg and made the rolling  waves. 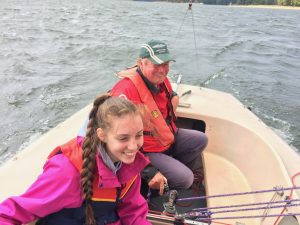 We sailed by the other boats and so plenty of waves and smiles – so it seems everyone was enjoying themselves – Neve didn’t say too much, but she did have an almost permanent smile on her face as Satyr showed what she can do, cutting through the water and managing to get the crew soaking wet – I did say there would be spray 😉

Time Flies was first in, closely followed by Satyr and Lift Off.

Our guests needed to be away, so missed out on putting the boats away and the post sail debrief in the clubhouse and the round bought by Dave to say thank you to our helms for volunteering for the day.

We all agreed it had been a long and thoroughly enjoyable day sailing with our guests – we’re not sure who enjoys it most, us or them.  All we do know it was smiles all round. 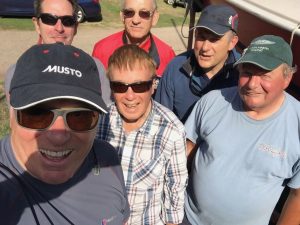 With thanks to all our helms who give their time freely supporting the taster days:
Back Row L-R: Stewart Snowball, Eric Andrew, Grahame Hudson
From Row R-L: Mike Threadgill, John Cranwell Ward and a rare picture of Dave Grundy – squinting into the camera with the sun behind it! Thanks all.