there will be water coming over the sides – even on a sunny day …………  and so it proved to be, with winds blowing Force 4-5 as we launched and by the time we came in there were waves on the lake and recorded at F6-7. 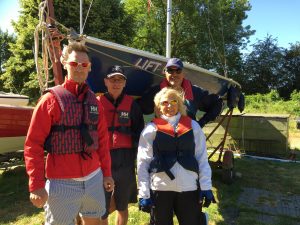 Four CSSC taster guests joined us for a sail, Elaine and Dave, and Derek and his son George. After  a quick cuppa, meet ‘n greet and safety briefing it was time to go to the ‘fitting room’ [the box adjacent the boats on the trailer] and be issued with buoyancy aid.

We were launching three boats today:  Time Flies ( John and and Eric), Lift Off (Tony) and Satyr (Dave and Sean) and by the time we got to the pontoon two boats were already ‘bobbing up and down’ with an brisk NW – N onshore breeze  F4-5 making for a tight departure from the pontoon. As it happens also sailing in the Formula 1 race were RCSSC members Stewart, Pete and Cathy.  The largest RCSSC contingent sailing together for a long, long time.

Leaving the pontoon was a challenge

and we all followed John’s advice to use a stern line to hold in the stern and back the jib to get the nose through the wind – and  …. like a race horse the boats were off enjoying the wind.  There are quite a few boats moored in this area and a very quick tack to port was need and we were off, headed to the southern leg of the lake.  Satyr was helmed out by new member Sean, Tony taking out Lift Off and John Time Flies.

we headed for the shelter of the peninsula 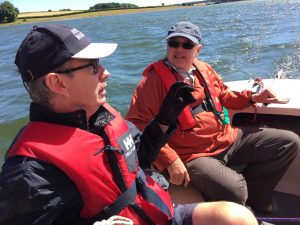 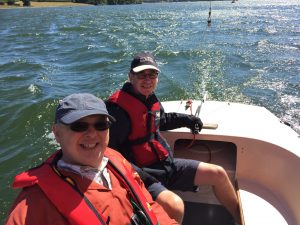 Fancy a sail? Derek enjoys a taste of helming. “More going on than you imagine” says Derek

Fancy a go on the helm Derek

With the backdrop of the Soling and Formulae One Championships and lots of other boats and windsurfers the lake made quite a site with lots going on and whizzing by.  With a view to giving our taster guests a fun day and a more comfortable sail we stayed in the southern part of the lake in the lee of the peninsula  (mainly).   This allowed Sean to relinquish the helm and invite Derek to go on the helm, with Sean and Dave close by and giving guidance and support as we sailed on a training run and had Derek tacking the boat and sailing a straight course.   With the wind and the speed of the boat, there were great splashes of water coming over the bows and ‘keeping the crew refreshed’.  Thankful of the  reminders to wear water proof  – but it doesn’t stop the water going down your neck or a wet bottom for those in shorts! 😉 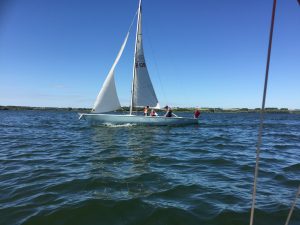 Taster guest Elaine gives us a wave from Time Flies sailing by Satyr. Wind F4 – 5 and shortly after this picking up F6 – blowy

Meanwhile we could see Time Flies and Lift Off defying their years (like Satyr, both boats are heading for 50 years) and racing across the water at a pace with crews and taster guests waving to each other as we passed by one another. 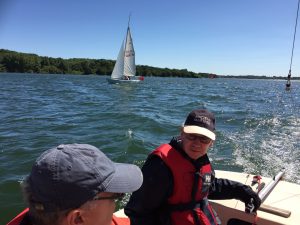 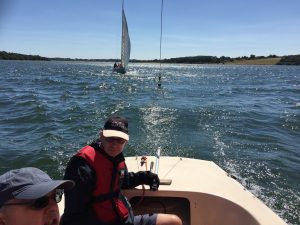 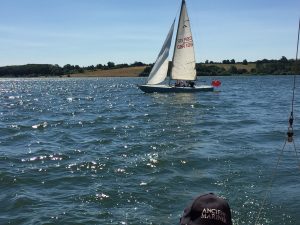 The wind had picked up to F5 -6 (stronger than forecast and later ratified by the Racing Organisers as gusting up to F7!!  Well blowy  and time to return to the pontoon.  The only trouble being the wind had now veered  round to an  Easterly giving us a long beat back up the lake to get back to the club.  More water on board as we dashed into the ever-growing waves – and huge grins all round on Satyr with Dave on the helm and putting her through her paces.  The lake is over a mile wide so by the time we got to the southern side of the lake, the protection of the peninsula was lost and Sean was giving warnings of heavier gusts approaching (great crewing).  More than a few times we had water coming over the gunwale and the top decks swimming in water – but always in control and providing an exciting sail. 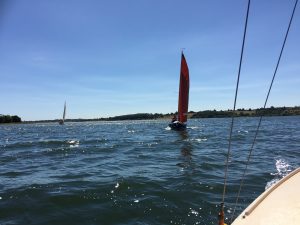 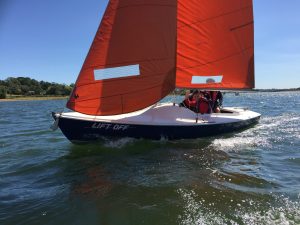 Port to Port sail past – Lift Off viewed from Satyr

Returning to the pontoon in a F5-6 blowing us on

Satyr was first back and  Dave as helm, outlined the plan.  OK?   Yes say Sean.  I didn’t understand a word says Derek but it good for me.

The plan was to sail into the area between the two jettys, passed the place picked out to come in on ( a very small space between Stuart Snowballs boat and a club launch) , turn to port head to wind to bring the boat to a stop.  The challenge being as we came in the wind was behind us and we were really racing in.  This was going to be tricky.   Sean was ready to jump off with the bow line when I called for him to go forward onto the foredeck and Derek was in charge of the jib and Dave on the helm.  With a little help from Pete on the pontoon, we arrived at the pontoon and it was fenders out on the starboard side as the wind was really picking up and we needed to protect the boat.

We saw Time Flies who was rocketing down towards the first pontoon which had a clutter of small sailing boats and a spot just big enough for Time Flies 27 ft – there was nowhere else to call.   John brought her in on what I can describe as a handbrake turn and woosh!  she settled gently into her spot by the pontoon. That’s the way to do it.

This left Lift Off and Tony with two guests and no competent crew.  On our pontoon there was tiny spot. Dave negotiated that boats all tighten up creating a very tight space.  John shouted from the other pontoon to move the launch back and this improved the ‘target’ area for Tony, but it was still very, very tight.  As a precaution we put Sean on the launch with a fender and Dave stood by to grab Lift Off’s when she came in.   Waving we were able to attract Tony’s attention and the propose route in.   Lift Off came down parallel to the pontoon at a rate of knots.   A sail passed the point, a turn of the tiller and head to wind and heading by the launch to the pontoon and Lift Off arrived – safe and sound.  Phew!  Let’s just say it was ‘exciting’ and tested the skills of the helm and crew to act positively and quickly – the wind doesn’t wait.

After making sure all boats were safely moved, plenty of fenders out between the boat and the pontoon it was time for a late lunch and constant talk about the exciting and fun sail we’d all enjoyed. Big grins all round. 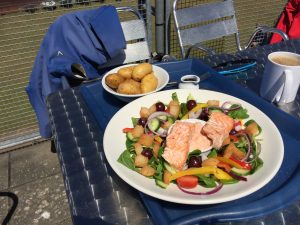 Lunch – we have new caterers in and as well as the standard fare to found on the hot plate they have introduced some healthy options – I just had to take a picture of mine – which was so big I shared it with Tony G.  Salmon and Shrimps with a salad and balsamic vinegar with some baked new potatos. Nom, Nom and just the job after the exciting and excellent sail in good company. 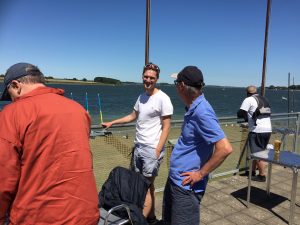 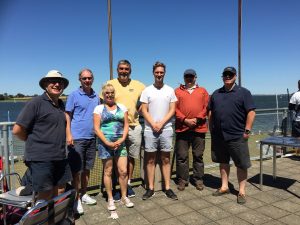 After lunch it was agreed we’d had a great sail and we should recover the boats.  In very lumpy water it was important to get the boats onto the trailers quickly and recovered to prevent hull damage.  In less than 45 mins we had recovered all three boats.

Thanks to our taster guests for joining and, based on your feedback, you all  enjoyed your taster would like to come again – you’d be very welcome.

In summary, it was exciting,  fun and you were in safe hands!

See you all again soon.